An Easy Way to Get Your Own Binary Repository

A Binary Repository Manager (BRM), according to Wikipedia, is “a software tool designed to optimize the download and storage of binary files used and produced in software development”, such as .jar, .tar, or .zip archives. Being a critical component of most DevOps toolchains, BRM resides right after the build pipeline. It is why it is sometimes called “build repository”, “artifact repository” or “pipeline state repository”.

A traditional DevOps pipeline expects the source code that is automatically validated, tested, packaged, and versioned into an artifact (a binary file). Then, the artifact must be stored outside of the source code repository and available for later stages of the continuous delivery pipeline. Being a central point for management of binaries and dependencies, and an integrated depot for building promotions of internally developed software, the BRM is supposed to host these artifacts. A software project of almost any size needs to keep its binary artifacts in a repository to enable access to them by programmers or by tools that ensure Continuous Integration (CI), Delivery (CD) and Deployment (CD). Since the quality of the software that manages the repository matters, the BRM should meet such requirements as

Integrability–there are plenty of build automation tools for each programming language, like Maven for Java, Npm for JavaScript, or Rake for Ruby. There are also many continuous integration tools, like Jenkins or Travis. Since automation is the most important aspect of DevOps, it is expected to have plugins for each or most of them, enabling seamless integration with the BRM.

Availability–artifacts are important components of a software development process and they must be available to a programmer or a build tool immediately when needed, without even minor delays, and delivered at the highest possible speed.

Scalability–most build artifacts are large binary files; some of them may be larger than 1Gb, for example, Docker images or .war (production-ready Java archives). The BRM must be able to maintain large data sets, up to almost no size limitation.

Reliability–the ability to corrupt the data because of software or hardware failures must be excluded as much as it is possible.

All Artipie components are based on reactive, asynchronous, non-blocking, and back-pressured streams and principles, allowing Artipie to withstand heavy workloads with a small number of kernel threads. 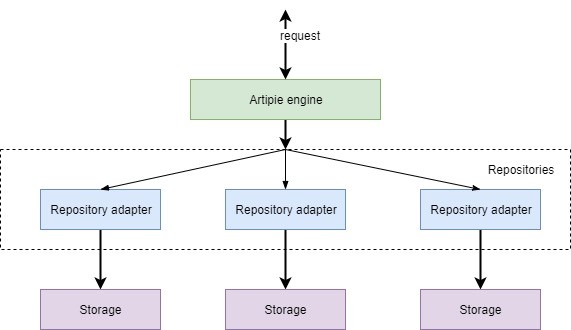 The Artipie engine is a Java application, which exposes an HTTP endpoint for repository access and management operations. It routes HTTP requests to the repository adapter and provides authentication mechanisms. The Artipie HTTP engine, built on the Vert.x and RxJava frameworks, provides lightweight flexibility and scalability to the project through asynchronous, reactive, and non-blocking operations.

The most common data flow for the Artipie upload action is as follows: the client is sending some binary artifact to the server, which finds a responsible repository adapter to process the request; the repository adapter saves the stream to the storage; after completing, it updates the metadata of the repository (some repositories work differently, for example, Docker uses metadata as a path). 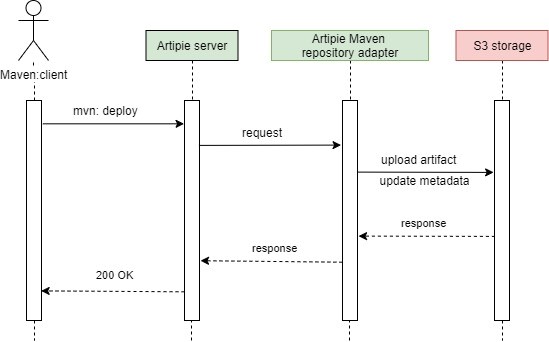 Repository adapters place the uploaded and created binary files in the storage. Artipie has abstract storage that provides an abstraction over a physical data storage system. The simplicity makes it easy to implement the interface for almost any data storage system. It has two major operations: to put and get an item from storage with a few additional functions, such as to check if an item exists, to list storage items, or to obtain the item metadata.

At the moment, there are the following storage implementations:

Abstract storage also provides an interface that can be implemented to support any type of storage you need.

You have two options for working with Artipie:

I will show a simple example of how to run Artipie locally with Docker Compose and configure it as a repository for Docker images on a Windows machine.

To run Artipie, you need to have Docker installed, then you can simply clone the GitHub repository with the example on the path C:\, or follow the steps:

In the CLI, we see that Artipie has started on port 8080 and found a repository configuration file my-docker.yml.

Before pushing any images, let's pull an existing one from Docker Hub. My choice is an alpine image. Pull the alpine image with the command: docker pull alpine:

With the next command, we create our docker image called myfirstimage from the alpine image for pushing it to our Artipie repository:

Now, we have to login into our own registry with the default user artipie|artipie, because the Docker registry supports only authorized users: docker login --username artipie localhost:8080:

A binary repository is a key element in any DevOps pipeline and various projects need various types of binary repositories to store artifacts. Almost every programming language ecosystem has its own kind of artifact repository. Artipie provides a wide range of adapters for the major packaging formats in one product, enabling the management of all artifacts from one place. Artipie is growing and developing rapidly, and it provides the ability to add the implementation of its own binary data storage, in addition to File, Redis, and S3 storage.

Artipie is a good choice for storing binary artifacts because it is simple for configuration. It has support for many types of repositories. As an open-source product, it is absolutely free for use.

Services offered by us: https://www.zippyops.com/services

If this seems interesting, please email us at [email protected] for a call.

Protect the Pipe! Secure CI/CD Pipelines With a Policy-Based Approach

Role of AI and ML in DevOps Transformation