This article is comparing both Kali Linux and Parrot OS features to choose the best system based on preferences and functions.

Linux is a well-known operating system that is known to many developers and security hackers. Many Linux distributions in the market are flexible based on the workflow if you are a hacker, bug bounty hunter, penetration tester, or security researcher.
Linux has a diverse set of distributions that are accessible, but the most famous among the distributions is the Kali Linux operating system. Kali Linux and Parrot OS are among the most favored operating system of ethical hackers and penetration testers to carry out testing and ethical hacking.
This article will compare both Kali Linux and Parrot OS features and choose the best based on preferences and features. Gaining expertise in either of these systems will help you become certified cybersecurity professional.
What Is Kali Linux?
Kali Linux is developed and maintained by offensive security, a leading information security training company. It is Debian based Linux distribution system primarily used for advanced security penetration testing and auditing. Kali has Linux kernel as its core, as the name suggests.
Debian-based system means that the code repositories in Kali adhere to Debian development standards. Kali holds more than 600 pre-installed tools which help or aid in various security tasks such as web application testing, penetration testing, computer forensics, security research,  and reverse engineering.
Kali Linux is a complete top to bottom rebuild of BackTrack Linux distribution and was released in 2013.
Features of Kali Linux 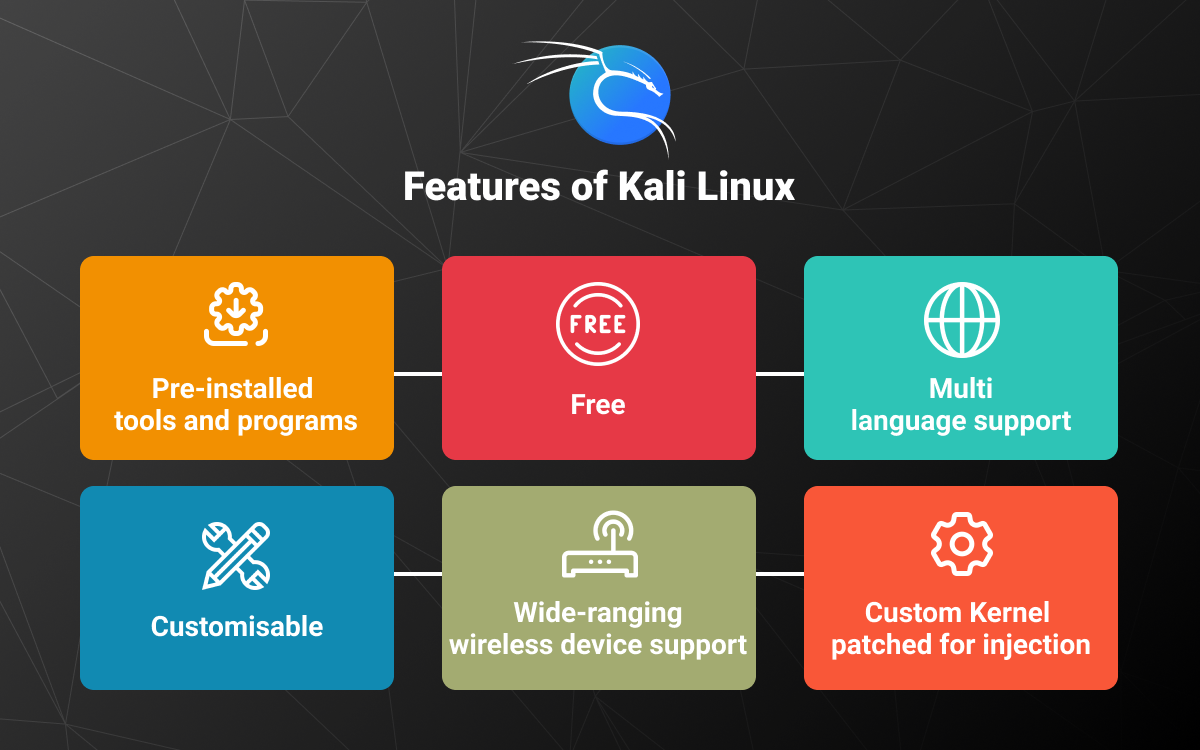 What Is Parrot OS?
Parrot OS is a free open-source GNU/Linux-based operating system that is Debian-based and primarily developed for security experts, developers, and privacy preferring crowd.
Like Kali Linux, Parrot OS possesses a full portable arsenal for IT security and digital forensic operations. Parrot OS also includes tools that you need to develop your own programs and protect your privacy.
Along with the transferable tools parrot, OS also consists of hundreds of pre-installed tools that help in penetration testing and security auditing.
Features of Parrot OS Kali Linux and Parrot OS are both Linux-based operating systems and have the same purpose, i.e., penetration testing, cybersecurity, and security auditing.

The preference of Parrot OS via kali or vice versa is subjective and entirely depends on the user. Before we further go into the comparisons, let us look at some similarities.
Similarities
Now let us see the differences between the two operating systems.
Hardware Requirements:
Hardware requirements are often ignored or not paid much attention to as developers or users mostly have a high-end system that meets the minimum requirements or, in some cases, is much more powerful.

But based on the above table, we can conclude that Parrot OS is lightweight and requires lower hardware specifications such as low RAM, no graphical acceleration, and low memory, which enables it to run efficiently run on low powered systems.
Look and Feel
The Parrot OS interface is built with Ubuntu-Matte-Desktop-Environment. The display is divided into two sections. The upper section consists of a panel that holds the applications, systems, and places menu, whereas the bottom pane consists of the workstation manager.
The OS parrot panel also provides additional information like CPU temperature and application usage graph.
On the other hand, the Kali Linux interface follows the GNOME desktop interface, which provides the same functionality as Parrot OS but lacks that refined, slick, and clean look.
The panels in Kali look much more complicated and cumbersome, and it is easy to get lost in this interface if you are not aware or have used this interface before.
Hacking Tools
While both the operating systems have a similar set of tools, Parrot OS has some additional tools which are not available in Kali.
A few such tools are:
Wifiphisher: It is a unique access point framework used for conducting Wi-Fi security testing. This tool provides the penetration tester with a Man in the Middle position, which allows an external source to perform targeted association attacks against wireless clients. Wifiphisher can also be used to launch phishing attacks against the connected clients to gain unauthorized access to sensitive information or penetrate the system by infecting it with malware.
Anonsurf: Anonymising a system is the most important step for a hacker before launching an attack. Anonsurf is one such tool that allows anonymizing the system efficiently using TOR Iptables. TOR is a pre-installed tool in Parrot OS, whereas, in kali, it is not pre-installed. You have to import and download Anonsurf.
Variations
Both the systems have many variations, but comparatively, Parrot OS has more. The following are the variations:
Kali Linux:
Parrot OS:
• Parrot Sec OS Lite Edition
• Parrot Sec OS Full Edition
• Parrot Sec OS Air Edition
• Parrot Sec OS Studio Edition
We can see that Parrot has some diverse features with a release concentration on wireless penetration testing (AIR) and one that is tuned for multimedia content creation(studio). Both have basic cloud support and IoT devices support.
Performance
Since Kali has high-end hardware requirements, it can be a bit laggy and slow when running on a low-end system. The experience is not satisfactory when multiple programs are running in the background.
Comparatively, the parrot is lightweight, has a slick interface, and runs easily without any lags even on a low-end system.
Conclusion
Both operating systems have similar features except for some basic differences. Using one over another is completely subjective and a matter of personal choice and requirements. The Parrot OS is lightweight, has additional tools, and has a smooth interface, making it much preferable.
The other disadvantage of Kali Linux is that the default user for kali is the root that encourages an aggressive operating environment, making it much more difficult to deal with in case of a mistake.
Overall, Parrot OS is a much better choice if you know the basics of Linux.
We Provide consulting, implementation, and management services on DevOps, DevSecOps, Cloud, Automated Ops, Microservices, Infrastructure, and Security
Services offered by us: https://www.zippyops.com/services
Our Products: https://www.zippyops.com/products
Our Solutions: https://www.zippyops.com/solutions
For Demo, videos check out YouTube Playlist: https://www.youtube.com/watch?v=4FYvPooN_Tg&list=PLCJ3JpanNyCfXlHahZhYgJH9-rV6ouPro
If this seems interesting, please email us at [email protected] for a call.
Automate Server Hardening with AutomateCIS
Safeguarding IT systems against cyber threats would take lots of time and required many meetings between IT and Security to debate which configuration settings.
Center For information security(CIS) has developed CIS Benchmarks for operating systems and cloud platforms. But applying them to individual systems and auditing their current state is impracticable.
AutomateCIS is a scalable platform to Audit your Servers against CIS Benchmarks, Remediate the failed audits, and rollback the remediation just in case the remediation is causing issues on your application
Try AutomateCIS Free here: (https://www.zippyops.com/automatecis)
Relevant Blogs:
Intrusion Detection System